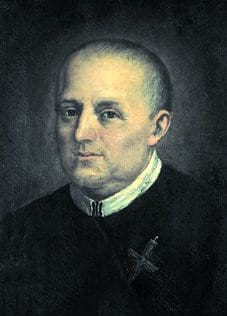 A look at the life of Clement Hofbauer can teach us much about a dream come true, about prayer and service, about perseverance in the Christian life, about becoming a saint by living each day as it comes, and using each moment of time for its proper purpose. Clement was not a miracle worker or a visionary, just a great and holy Redemptorist serving God's people to the best of his ability.

Our saint was born on the feast of Saint Stephen, December 26, 1751, in Tasswitz, Moravia. He was the ninth of twelve children born to Mary and Paul Hofbauer. Baptized the very next day, he was given the name of Hansl, or John. He would be known that way for more than twenty years until he entered a hermitage and took the name of Clement.
The saint's older brother, Karl, had gone off to fight with the Hungarian cavalry against the Turks. Hansl could not wait until he would be old enough to wear the blue uniform with the silver braiding and the brown felt cap with the red piping.
He also had his boyish sights on another goal, however. While serving Mass he would imagine himself as a priest standing at the altar, wearing the priestly vestments, and leading the people in the Church's great act of worship and praise to God.
It was the goal of the priesthood that finally won out over the career in the army. Coming from a poor family, however, Hansl had little chance to go away to a seminary or join a religious order.
Hansl began to study Latin at the parish rectory. The pastor was a kindly old priest who recognized the seeds of a priestly vocation in the young Hofbauer. Daily the young student and the aging pastor would meet to study the Latin language. It was to be the first step on Hansl's long road to the priesthood. The period of study ended abruptly with the death of the pastor when Hansl was just fourteen. The new pastor did not have time to help him study Latin.
Unable to continue studying for the priesthood, Hansl had to learn a trade. He was sent to become an apprentice in bake shop in 1767. In 1770 he went to work in the bakery of the Premonstratensian monastery of the White Monks in Kloster Bruck. At that time, the effects of war and famine were sending many homeless and hungry people to the monastery for help. Hofbauer worked day and night to feed the poor people who came to his door. While this was still not the priesthood that he wanted so badly, it was an opportunity to help God's people who were in great need.
In 1771, a trip to Italy brought Hofbauer to Tivoli. He decided to become a hermit at the shrine of Our Lady of Quintiliolo and requested the hermit's habit from the local bishop. It was at this time that Hansl Hofbauer received the name of Clement Mary: Clement from the bishop of Ancyra in Asia and Mary from our Blessed Lady. As a hermit, Clement prayed for himself and for all the people in the world who forgot to pray. He worked at the shrine and assisted the pilgrims who came. Clement did not find happiness, however, and in less than six months he left Quintiliolo. He realized the need to pray for people and saw this as good work, but it was still not the priesthood that he wanted so badly.
He returned to the monastery of the White Monks at Kloster Bruck to bake bread and to begin the study of the Latin language once again. Although he completed his studies in philosophy by the year 1776, he could proceed no further. The Emperor would allow no new novices for the White Monks, and so Clement found the road to the priesthood gone once again.
He went home and lived for two years as a hermit at Muehlfraun, forcing himself to endure strict fasts, harsh penances, and long vigils of prayer. At the insistence of his mother he left the hermitage to become once more a baker of bread. This time he got a job at a famous bakery in Vienna where he met two distinguished ladies who became his greatest benefactors.
At the age of twenty-nine, after being a baker in three places and a hermit in two others, Clement entered the University of Vienna. Since the government had closed all seminaries, students for the priesthood had to study at government-controlled universities. Clement was frustrated by the religious studies courses that were permeated by rationalism and other unquestionable outlooks and teachings. Undaunted, he continued seeking the truths of the faith and pursuing his dream of the priesthood.
During a pilgrimage in 1784, Clement and his traveling companion, Thaddeus Huebl, decided to join a religious community. The two seminarians were accepted into the Redemptorist novitiate at San Giuliano in Italy. On the feast of Saint Joseph, March 19, 1785, Clement Hofbauer and Thaddeus Huebl became Redemptorists, publicly professing to live the vows of poverty, chastity, and obedience. Ten days later they were ordained to the priesthood at the Cathedral of Alatri.
A few months after their ordination the two foreign Redemptorists were summoned by their Superior General, Father de Paola. They were told to return to their homeland across the Alps and establish the Redemptorist Congregation in northern Europe. It was a difficult and unusual assignment for two men so recently ordained. To Alphonsus, this spread of the Congregation beyond the Alps was a sure proof that the Redemptorists would endure until the end of time. To Clement, it was a dream come true.

In September 1808, after being exiled from Poland, Clement reached Vienna. He remained there until his death almost 13 years later. In 1809 when the forces of Napoleon attacked Vienna, Clement worked as a hospital chaplain caring for the many wounded soldiers. The archbishop, seeing Clement's zeal, asked him to care for a little Italian church in the city of Vienna. He remained there for four years until he was appointed chaplain to the Ursuline Sisters in July 1813.
Attending to the spiritual welfare of the Sisters and the lay people who came to their chapel, Clement's true holiness came even more to the fore. At that altar his reverence made it plain that he was a man of faith. In the pulpit he spoke the words that the people needed to hear. He preached so that they could see their sins, realize God's goodness, and live their lives according to the will of God. But if he was a lion in the pulpit, Clement was a lamb in the confessional. He listened to the penitents' sins, gave them a message of encouragement, asked God to pardon them, and sent them on their way.
In those early days of the 1800s, Vienna was a major European cultural center. Clement enjoyed spending time with the students and the intellectuals. Students came -- singly and in groups -- to his quarters to talk, share a meal, or get advice. A good many of them later became Redemptorists. He brought many rich and artistic people into the Church including Frederick and Dorothy von Schlegel (she was the daughter of Mendelssohn, the founder of the Romanticist school); Frederick von Klinkowstroem, the artist; Joseph von Pilat, the private secretary of Metternich; Frederick Zachary Werner, who was later ordained and became a great preacher; and Frederick von Held, who became a Redemptorist and later spread the Congregation as far as Ireland.
In Vienna Hofbauer again found himself under attack. For a short time he was prohibited from preaching. Then he was threatened with expulsion because he had been communicating with his Redemptorist Superior General in Rome. Before the expulsion could become official, Emperor Franz of Austria would have to sign it. At the time the Emperor was on pilgrimage to Rome, where he visited Pope Pius VII and learned how greatly the work of Hofbauer was appreciated. He also learned that he could reward Hofbauer for his years of dedicated service by allowing him to start a Redemptorist foundation in Austria.
So, instead of a writ of expulsion, Hofbauer got an audience with Emperor Franz. Quickly the plans were made. A church was selected and refurbished to become the first Redemptorist foundation in Austria. It was to be started without Clement, however. He took sick in early March 1820, and died on March 15 of that year. Like Moses in the Hebrew Scriptures, he had brought the people to the Promised Land but he himself did not live long enough to enter it. He died with the gratifying knowledge that his second dream had been fulfilled.

Clement Hofbauer was beatified on January 29, 1888, by Pope Leo XIII. He was canonized a saint of the Catholic Church on May 20, 1909. In 1914, Pope Pius X gave him the title of Apostle and Patron to Vienna. Today, more than 150 years after his death, the yearly feast of Saint Clement is remembered in a very special way by the people of Vienna and the six thousand priests and Brothers throughout the world who wear the Redemptorist habit just as Saint Clement did.
What made Clement Hofbauer a saint? He performed no miracles to dazzle us, received no visions or ecstasies to overawe us. He even had faults -- a quick German temper, a tendency to be gruff. Yet, if we could have spent a few hours in his presence, we would have found him to be a man of unusually strong faith, a man of extraordinary calm and peace, and a man who could work tirelessly for souls.
Simplicity was the chief characteristic of his sanctity. He accepted the will of God as it came to him, and did all the good that he was capable of doing. He led a life of innocence and service devoting himself to glorifying God and drawing others to serve him. In the very simple way that he became holy, Saint Clement is a model for all people.